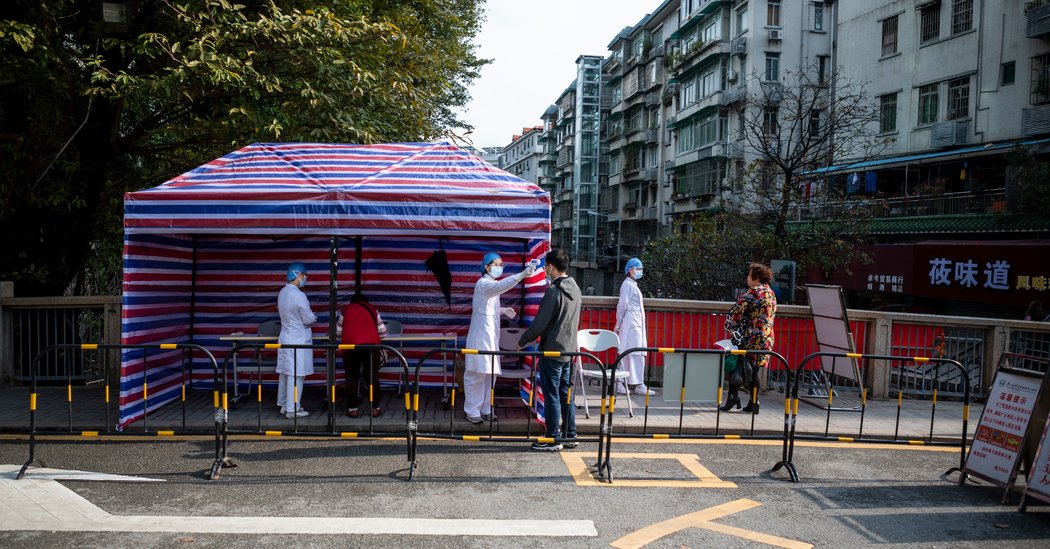 China’s leaders expanded a mass roundup of people possibly sickened with the coronavirus on Thursday, widening their dragnet well beyond the epicenter of the outbreak to at least two more cities in what the government has called a “wartime” campaign to stamp out the epidemic.

But the campaign, first announced last week in the city of Wuhan, already has been marred by chaotic conditions that have isolated vulnerable patients without adequate care and, in some cases, left them alone to die.

The expansion of the decree to “round up everyone who should be rounded up” in the Wuhan area of central China has deepened the nation’s sense of anxiety.

In their zeal to execute the edict, officials in Wuhan, a metropolis of 11 million, have haphazardly seized patients who have not yet tested positive for the coronavirus, in some cases herding them onto buses with no protective measures where they risked infection from others, their relatives said.

After that, patients have been sent to makeshift medical facilities that don’t provide the support they need to recover. With little to no dedicated medical staff on hand to help, some patients die.

One woman was abruptly carted off to a quarantine facility and prohibited from retrieving her supply of heart medication, her daughter-in-law said. A man said he was getting sicker and sicker in his hotel room, but there were no doctors and he was not allowed to leave.

Another man placed in a makeshift shelter fell into a coma for two days, but his family said they couldn’t get him admitted to a hospital. He died.

Despite the upheaval, the mass roundup extended beyond Wuhan to include other cities in central Hubei Province that have been hit hard by the outbreak. The state-run CCTV news broadcaster said the expanded area included the cities of Huanggang and Xiaogan.

A sudden spike in new cases could make the situation worse. Officials in Hubei Province announced on Thursday that they had expanded the criteria for counting new infections to include diagnoses by doctors based on a chest scan and symptoms, rather than a more complicated test. The tally from the outbreak surged as a result, with the province adding nearly 15,000 new cases and 242 new deaths in a single day.

The surge continued on Friday, though not as markedly, when Hubei officials disclosed about 4,800 new cases and 116 additional deaths.

The rise in confirmed cases, to about 52,000 over all in the province, could overwhelm an already burdened health care system, which faces a shortage of hospital beds and medical supplies. Even before the new numbers were reported, many residents had been slipping through the cracks.

One Wuhan resident, Peng Andong, 59, had been suffering from a persistent fever and lung infection for days when his local neighborhood committee told him to go to a makeshift quarantine site last week.

Mr. Peng and his family were told that there would be doctors at the quarantine site, as well as test kits so he could get the official confirmation needed to receive proper treatment. So on Feb. 5, Mr. Peng boarded a bus full of sick patients — none wearing protective gear — and was driven to a hotel converted into an isolation center.

For several days, Mr. Peng messaged with his relatives regularly, updating them on the tumultuous conditions inside the hotel.

“He said it was really chaotic in the first few days and there was no food or medical staff there,” said Peng Bangze, his son. Others have described similar conditions in interviews and in calls for help posted on social media.

Deng Chao, 30, said that although doctors had told him he almost certainly had the coronavirus, he hadn’t yet received the official results from the test that is needed for hospital admission.

Instead he was sent to a Wuhan hotel where he has been in a government-imposed quarantine for nearly a week. Now, he said, he was getting progressively sicker and finding it more difficult to breathe. He said security guards had been stationed at the hotel entrance to prevent patients from escaping — and there were no doctors or medicine.

“This is really like a prison,” Mr. Deng said.

“Send me to a hospital, please, I need treatment,“ he said, in between bouts of coughing. “There is no one to take care of us here.”

The problems are likely to compound the public outrage over the government’s response to the coronavirus outbreak, the most serious health crisis to afflict China under President Xi Jinping. Local officials played down the virus in the early days, while the eventual lockdown of Wuhan cut the city off from critical supplies and resources.

In a sign of an aggressive effort by Mr. Xi to contain the political and economic damage of the epidemic, the Chinese Communist Party on Thursday fired the leaders of Hubei Province and Wuhan.

Global reverberations from the coronavirus crisis have shown no sign of slowing.

The Chinese government’s drive to corral people into makeshift medical facilities in Wuhan began earlier this month, as it became clear that patients were infecting family members after being told to quarantine at home. Desperate officials hastily devised plans to convert stadiums, exhibition centers, hotels and schools into temporary medical centers for thousands who could not get admitted to a hospital.

Confirmed coronavirus patients with mild symptoms were put in large converted spaces. Suspected cases went to requisitioned hotels and schools to be isolated. The close contacts of confirmed cases and patients with fevers who could have been infected were also put in separate facilities. Some confirmed cases with serious symptoms have been transferred to two newly built hospitals dedicated to treating coronavirus patients.

Despite some complaints about the scarcity of toilets and concerns among experts about the potential for cross-infections, some patients in such venues say they are mostly satisfied with the conditions, and are relieved to be out of their homes where they were worried about infecting relatives. Images circulated from inside the centers show patients dancing and lying in beds playing on their phones. One patient was even photographed reading Francis Fukuyama’s “The Origins of Political Order.”

But in many cases, the effort appears disjointed and disorganized. A report by the official Xinhua news agency said that because of the “limitations” of some quarantine sites, sometimes two or three patients with suspected cases were housed in the same room.

Another Xinhua report detailed how community workers doing door-to-door checks had to talk to neighbors and check on clues like hanging laundry to ensure every household in Wuhan was counted. Even The Global Times, the nationalistic party newspaper, reported on the frustrations of a public bus driver who tried in the middle of the night to round up people suspected to have infections.

Patients and their relatives have complained about the dismal conditions, particularly in venues where patients need isolation and medical attention.

On Feb. 8, just two days after her husband was admitted to the hospital for coronavirus, doctors told Ma Xilian, 59, she likely had it, too, based on a chest scan and symptoms. She was told to immediately report to a designated quarantine site for isolation. Her requests to go home to retrieve her heart medication were denied.

In the converted hotel where Ms. Ma was sequestered for days before she finally secured a hospital room, there were no doctors, medicine or even water, according to a plea for help posted by her daughter-in-law on Chinese social media, one of many similar calls for assistance that have surfaced online in recent weeks.

Some say that the lack of medical care in the makeshift quarantine centers has only made their illnesses worse. For some families, the poor conditions have led to the worst news.

Peng Bangze, whose father was sent on a crowded bus to a converted hotel for isolation, recalled visiting last Saturday, after his father had been unreachable all day.

He found his father in a comatose state alone in his room.

Panicked, he called for help. When the ambulance came, both the driver and the hotel security guard refused to help him move his father, a construction worker, into the vehicle for fear of getting infected, the son said. One hour later, the son was told that the hospital had no bed for his father and that he should go home and wait.

Two days — and many phone calls — later, Mr. Peng’s relatives finally received a call from the local government notifying them that a hospital bed had been arranged. But when Mr. Peng’s son arrived at the hotel to help with the transfer, his father was lying face down on the bed, lifeless, in the same position he had left him.

The workers at the isolation venue had no explanation. They disinfected the room, the father’s body was removed for cremation, and the son collected his belongings.

“I don’t know how this happened,” the son said. “It all happened in a few days. How could he suddenly be gone?”